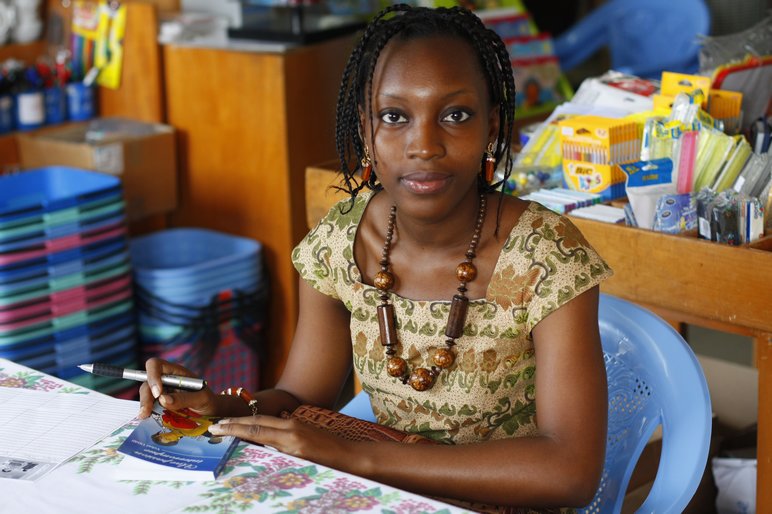 At the age of 24, Yehni Djidji is Ivory Coast’s newest published author and quite probably the youngest as well. I picked up my copy of ‘Une passion interrompue’ (A passion interrupted) at the weekend at the first official book signing, in Rivieria. At the risk of being a bit too ‘niche’ (reviewing in English a book written in French and only available in Abidjan), here are a few of my thoughts.

The book is a quick read, so you shouldn’t have any problems even if you’re not a native French speaker. At less than 200 pages, large type, it’s digestible in an afternoon (as was the case for me on Saturday). Without giving too much away, the storyline is of a young couple about to be married who come across a dark family secret. The couple falls apart, each go their separate ways, but as the story unfolds we wonder if true love will prevail.

Well, actually we don’t really, as the ending is no real surprise. We get plenty of twists and turns along way, but we kind of know things will turn out fine. In some ways the book resembles the Brazilian soap operas women love watching every evening on the Ivorian state television channel. The plotlines and characters aren’t too deep and we know things will work out.

In conclusion, a decent enjoyable well-written read, though no real surprises. As so often with Ivorian culture, the setting is Abidjan bourgeois life – Ivorians regularly seem desperate to prove how developed they are. At dinner last weekend I heard an Ivorian recount the visit of Rene Dumont, author of ‘Afrique noir est mal partie’ (Black Africa has started badly) in the 1960s. He got a poor reception from Ivorians shortly after its publication in 1963, who argued ‘certainly not here’. My friend lamented on how Dumont had been proved right in the end (his view not mine).

I think Yehni could move on to greater things. She writes very well (there are more young Ivorians who produce great photos than who write well) and I’d like to see deeper themes and more original plot twists – a bit too much of the regular Ivorian tropes of infidelity and wealth here for my liking. I thought more could have also been done to develop tensions and suspense – in this case dark secrets were quickly confessed without us having the time to feel their grip. I get the impression that it’s been a while since we had a great Ivorian literature produced here, so there’s a gap to be filled.