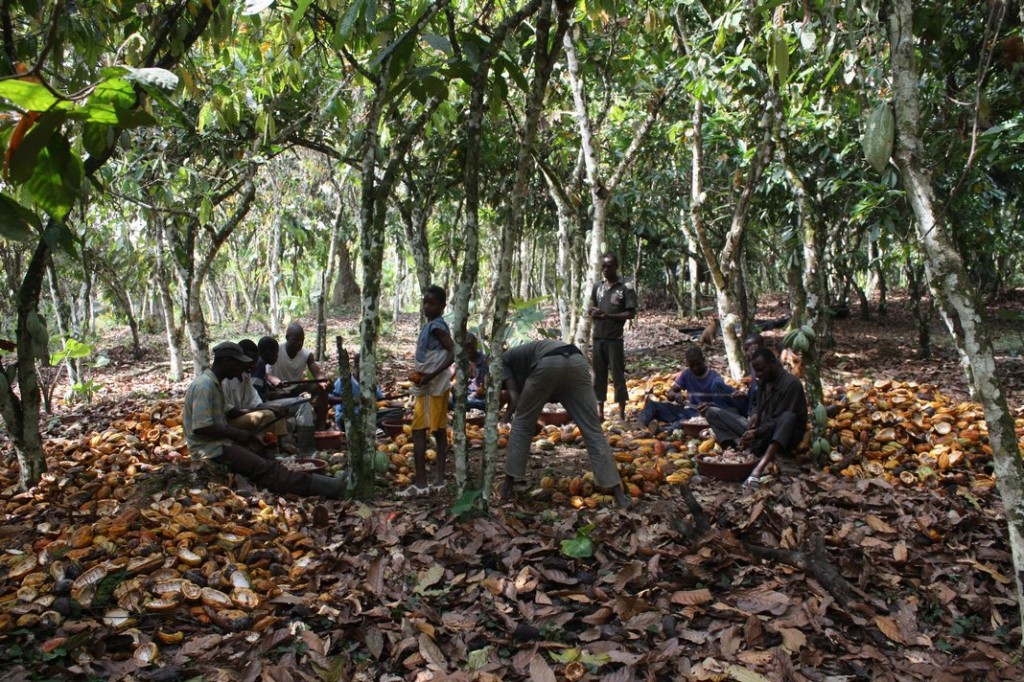 You’d think that in the world’s biggest cocoa grower, there would hardly be a day that goes by without some major cocoa story in the newspapers. Actually, the topic is very much neglected. And, if Ivorian journalists aren’t following the country’s chief economic asset, it makes you wonder what their priorities are and whether the ‘fourth estate’ is really holding power to account.

– Price – World prices at the highest levels in 30 years? Don’t expect to read about it here. Sure there are 700,000 households that depend on cocoa for the their main source of income, but they don’t tend to buy newspapers or hold positions of power so who cares? The UN radio normally offer a good news service, but in their daily economic figures report they give neither the government’s average farmgate price nor world prices. What they publish is the yearly indicative cocoa price, which actually means virtually nothing. This season the ‘guide price’ was set on 1 October at 1100 CFA francs a kilo, basically to ‘match Ghana’. That ignores the fact that Ghana has a sophisticated support mechanism for backing up the fixed price, whereas Ivory Coast has, er, nothing. Consequence; if you look at the sector’s own official figures (http://www.bcc.ci/prix.asp), you can see that the highest average weekly farmgate price this season has been 975 francs in week 14 (January). Even this figure looks like an outlier and was probably influenced by the holiday period. Interestingly, even in this rare example where the figures are actually posted on the management board website, they are not published in the press, let alone analysed.

The consequence of all this is that almost no information, debate or reform ideas are circulating about how things could be improved or where things are heading. That created an easy environment for politicians during the election campaign to make unchallenged claims like “under us the cocoa price has reached 1100 CFA francs for the first time in Ivory Coast’s history”, when in fact at no point this season have they practically gone over 1000 CFA francs. It’s also difficult to reform a system, when many farmers still think we’re in a fixed price system ten years after it was abolished.

– Cafe-cacao – The phrase cafe-cacao drips off the tongue in almost every speech in Ivory Coast. But a simple look at the figures will tell you that coffee has long lost its place as a primary contributor to the country’s GDP. Whenever I hear anyone say ‘our economy depends on cafe-cacao’, it says to me that the person hasn’t given real thought to the current state of the Ivorian economy. Let’s instead talk about rubber, cashew nuts, palm oil, telecommunications. If we stick to cliches, a real assessment of the country’s problems will fall short of what it could be. It’s also unhelpful for those coffee farmers that remain, whose sector is in big trouble, but don’t receive the attention they should get.

– Ownership – Every now and again you hear that the Ivorian power struggle is about a French battle for control of cocoa. What’s the reasoning? It runs something like; we think the French are trying to control our country, they must be after our resources, our resources are cocoa, so it’s all about cocoa. The problem is that with the retreat of Sifca from cocoa at the end of the 1990s the French have very little invovlement in Ivorian cocoa. True, Bollore exported cocoa with Dafci, but they were never a big player, and pulled out of the market last year.

There are quite a few allegations flying around at the moment about British firm Amajaro, which in Ivory Coast is run by Loic Folloroux, the son of the new First lady. But who takes the time to look at the figures? I did. Amajaro this season has bought less than 5% of the Ivorian crop. Even if that’s up from last season, it’s hardly in a dominant position. While it’s possible that this close family relationship will be used for economic advantage, it remains to be proved; the assertion that the family tie exists is not proof in itself that anything untoward is going on.

[I had to scratch my head today when someone told me the French were in charge of the gold mining sector in Ivory Coast – I ran through the list of gold mining companies here, and it’s pretty much that French bete-noire, the anglo-saxons, that rule the roost (Randgold, Newcrest, La Mancha, Cluff, Lihir, Etruscan).]

– Taxes – I’ve seen the following statement in the press on a couple of occasions recently: “The Ouattara government is promising to bring down cocoa taxes to less than 25% of the export cocoa price”. The previous government actually agreed to take cocoa taxes down to 22% of the export price; this was not a simple politicians’ promise – it was made to the IMF and World Bank and it is one of the technical triggers for debt relief under the HIPC scheme to which Ivory Coast is a member. In addition, not only is the old promise more ambitious than the one made by the new government, the old promise was actually kept and currently applies! On the 30th September 2010 (i.e. just ahead of the new cocoa season which begins on 1 October), the Ministry of Finance & Economy and the Ministry of Agriculture changed the taxing system so that all taxes are now percentages; i.e. the main export tax (the DUS) is no longer 210 CFA francs a kilo but 14.6%. Add up all the taxes and you get…22%. So, a well-informed journalist listening to the new government promise on cocoa tax would immediately ask the question: “So, you’re intending on raising taxation and reneging on previous promises under to the IMF and World Bank?” Needless to say, the statement has gone unchallenged.

– Transformation – Last season Ivory Coast was the world’s second biggest cocoa transformer, turning cocoa into semi-finished products like cocoa butter and cocoa liquor. This season, the country was due to become no. 1. That forecast was reported at the start of the cocoa season. Why? Because it was said at the opening of a cocoa factory at which lots of journalists were invited (and well treated). Last week, the body that controls cocoa announced that this season Ivory Coast would not only not gain no. 1 spot, but would slip to no. 3. Outrage in the local press? No, not a word. Journalists are consistently not holding people in power to account. If no-one’s even following the basics of cocoa transformation, don’t expect any debates on how useful transformation actually is and whether it benefits the Ivorian economy.

I could go on. Don’t expect much coverage of whether efforts to improve rural roads fulfil their promises, whether diseases are being tackled, why a cocoa reform committee set up with a three-month mandate more than a year ago has yet to finish its work, whether people who are said to represent cocoa farmers actually have any cocoa trees themselves…

The bottom line is that in cocoa, as in other sectors, the Ivorian media are failing to find an independent voice to critique and analyse the country’s current situation.

This entry was posted in Economics, Journalism. Bookmark the permalink.