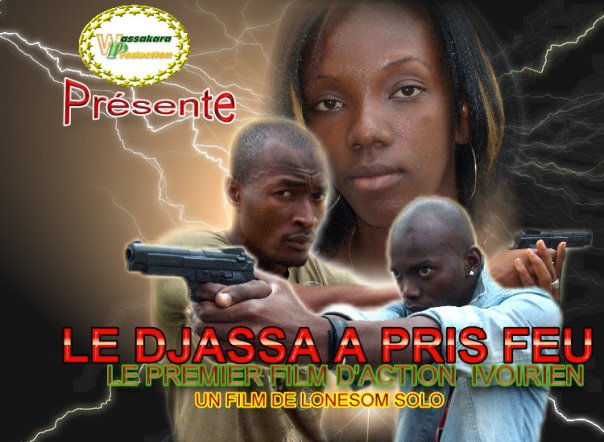 After ‘Le Mec Ideal’, I’m keen to watch a lot more Ivorian cinema; not perhaps the world’s most famous or developed industry, but still important if only for reflecting life here in this particular part of the globe. I’m not quite sure on the benefits of writing about such a niche market for films that you probably couldn’t watch if you wanted to, and almost certainly never translated into another language, but that’s what the web is all about (“one man and his Doberman blogging about Dobermans”).

I watched ‘Le Djassa a pris feu’ (2009) at the launch event of the “Association of Young Cinema and TV Technicians of Cote d’Ivoire” (AJTEC-CI) at the Institut Goethe (scene from the movie here).

The film tells the story of a family living in one of the poorest parts of Abidjan, not far from the mythic Rue Princesse in the district of Yopougon. The main character, Dabagaou, sells cigarettes and gambles, with an older brother in the police, and a sister who works as a hairdresser and also a prostitute, something neither of her two brothers are aware of. ‘Le Djassa a pris feu’ (translated loosely, ‘the ghetto has become hot’) claims to be the first ever in Nouchi (local urban Ivorian slang) and also the first action film produced in the country. It’s a realistic portrayal of life for young people scraping a living in poorer districts of the city, lacking the fabled opportunities of the post-independence generation and struggling to carve out a life in a violent setting.

The film was shot on location over 10 days; quite a feat and while a little rough, it does a good job of telling the story with a genuine creativity. The sound is well recorded, though I found the limitation of using a single camera, often filming around waist level, was a little annoying, though it gave a tense mood to the film, which added to the theme. The film had regular scenes with a humorous nouchi-speaking narrator (fortunately sub-titled in French) in which either the action we are about to see is described or a comment given on what has just happened.

At the showing, the small audience were quite critical in the post-screening discussion, which I thought went against the spirit of the film which was to just go ahead and try something on a very small budget and in a short period of time. The film was a little long, but the story was well told and I don’t think viewers would be disappointed. It was a good reflection on a part of society often neglected in Ivorian film, which tends to focus on the middle class bourgeois life that presents an aspirational image, presenting the country as it would like to be seen.

“By living life on the margin, young people abolish the gap between adolescene and adulthood, and in some cases between childhood and adolescence. Sex and violence became rites of passage and initiation which, like the new religious practices, produce a historicity of dissidence and dissent. By escaping the political and moral discourses that hemmed them in, and by moving into the cracks opened up by the crisis of the state and society, African youth has provoked an unprecedented moral and civic panic.” Mamadou Diouf quoted in ‘Making War in Cote d’Ivoire’, p. 107.