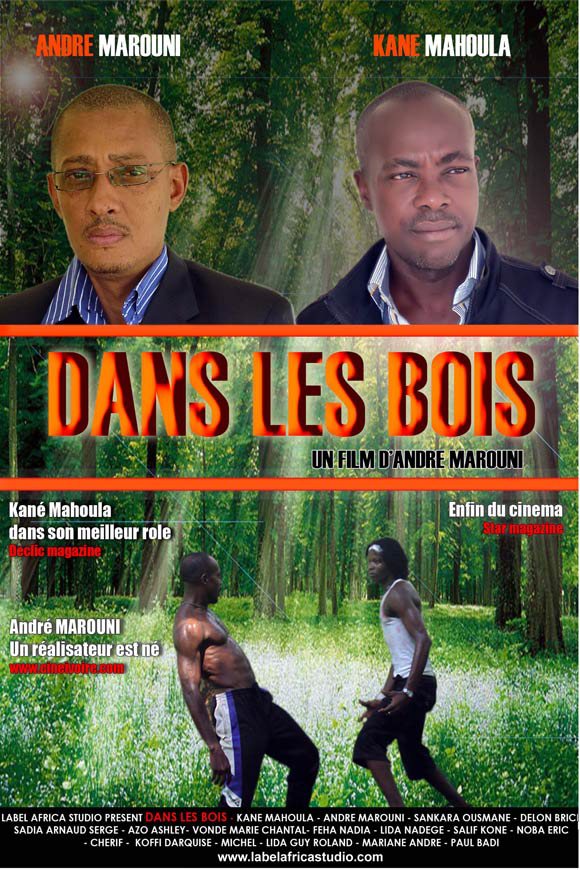 Andre Marouni’s ‘Dans Les Bois’ (‘In the Woods’) is the tale of a young Ivorian cadre (professional) played by Kane Mahoula who’s angry at the world, gets counselling from a psychologist (played by the director) and then heads off into the woods for a bit of time-off. In the woods he turns into a psychotic monster taking revenge on ‘sinners’ who happen to have decided to go to the woods on the same day. The avant-premiere has just taken place at the Sococe cinema, and it was good to see the room full with young people.

The film divides roughly into two halves. The first half has lengthy rather wordy and visually uninspiring dialogues in the psychologist’s chair mixed with introductions to the various individuals and lovers who’ll later travel to the woods. The second half deals with the forest-scenes and is largely devoid of dialogue. Personally, I found this rather unnatural – not only the lengthy philosophical dialogue at the start which never tends to work well in film (the motto in film as in literature tends to be “show me don’t tell me”) and then violent and physical encounters without words in the forest. If someone tried to kidnap you would you really say next to nothing? The film by the way does contain a bit of violence and a fair bit of nudity and sex, which makes it unsuitable for young audiences.

On the up side, I applaud Marouni for his effort in attempting in his own style to produce something different and meaty for Ivorian cinema. Mahoula does a good job as the madman and is well chosen for the role, with great physique. He’s about the only actor who manages/is allowed to bring depth to his character. I thought the original score did an excellent job of adding to the drama, something that for me was one of the highlights.

On the negative side, I thought most characters were very shallow, the lack of dialogue mentioned above was unnatural, there were some problems with the story-telling, and some camera-angles that grated. The sound was reasonable though could have been improved, particularly in the dialogue scenes. I thought the scripting was a little stilted – a dose of Ibsen-esque realism would have done well, though this sort of problem is widespread. I thought there was unnecessary confusion in parts, for instance where the forest victims were being ‘set-up’ in the story as bad people, we also saw the lead character engage in a one night stand, which I know was to make a point, but confused the roles.

Some faults are common to Ivorian cinema in general. The over-emphasis on bourgeois Ivorian life and the cardboard characters (unfaithful lovers, drug-users, over-sexed couples, people with hiv). Equally I don’t envy directors here who have to play to a cinema audience that cat-call and laugh out loud even at attempted serious scenes. I wonder sometimes if it’s difficult to do serious cinema because the audiences aren’t serious or because the directors lack the skills to make things serious. When someone was killed in the forest and we see a flashback saying “it would be a great idea to go to the woods”, I started to feel that maybe even the director was playing for laughs.

Making cinema here requires a huge effort that few are willing to support and for that I applaud Marouni for taking the time to produce this artwork. More could have been done though to study some of the genre trademark skills to give that sense of depth and seriousness to drama, and danger to thriller/horror scenes.

The film does finish with a nice twist.