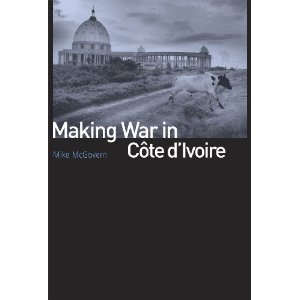 It’s not every day you get to write about a book dedicated to Ivory Coast – in fact it’s the only one I know of currently being published. So, whatever its quality, ‘Making war in Cote d’Ivoire’ (2011) would be an important publication. Fortunately it’s well worth reading as well. What you get in 215 pages is a broad explanation of the causes and effects of the Ivorian political crisis of the last decade.

The book was prepared prior to the recent post-electoral crisis, which is covered in a short afterword. Unfortunately even this was written during the battle for Abidjan when Laurent Gbagbo hadn’t yet been arrested. This can be a little frustrating as the situation has developed somewhat since the book was written, and we have quite a bit more information to judge on the direction Ivory Coast will take post-crisis. But that doesn’t necessarily make it out of date and the fact it was written prior to the recent trouble only highlights the continuities with an earlier period – massacres in the far West, use of Liberian mercenaries, the instrumentalisation of young people and the relevance (or not) of the neo-colonial argument.

The scope of the book is broad and personally I would have liked to spend a bit more time on many of the subjects covered. But what you get is a reasonably short book that covers everything from land disputes, migration, coupe decale music and cocoa.

This book will not be for everyone. McGovern is a Yale academic from an anthropological background, and as anyone who’s ever picked up an anthropology book will know, the language is rarely comprehensible outside the academy. The author though has spent a good deal of time with the International Crisis Group which produces well researched and readable reports designed for those in policy and politics. So if you haven’t done much study in the social sciences, you may find some passages difficult to digest, but it’s worth the effort and if you don’t understand the more complex parts, I don’t think you miss out on too much.

Personally, I enjoyed reading the discussions on why the Ivorian war never really started, how the growing use of anti-French/colonial language coincided with the period when the French were withdrawing anyway from Ivory Coast and the analysis of coupe decale.

So, for those interested in how Ivory Coast got to be as it as at the moment, this really is highly recommended and you will learn a lot.

Find a video discussion of the book with the author here.

This entry was posted in Culture, Politics. Bookmark the permalink.