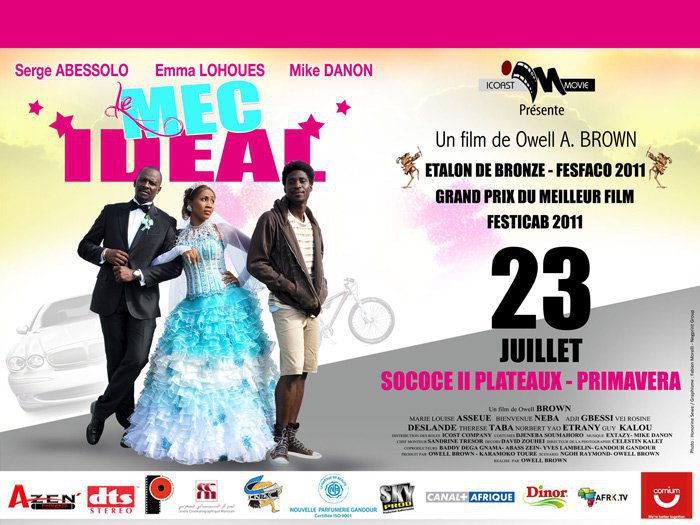 Saturday 23rd July sees the launch of Ivorian film ‘Le Mec Ideal’ in Abidjan’s cinemas (well in about the only two cinemas that remain). Back in early March as journalists here were reporting on the banks closing, the rising tension and the country heading towards war, neighbouring Burkina Faso hosted Africa’s principal film festival, Fespaco, which saw the Ivorian film pick up third prize (the first such award Ivory Coast has received there since 1991). It’s since gone on to win the prize of best film at the Festival of Cinema and the Audiovisual in Burundi. Quite an achievement for a low-budget film that’s a long way from the more serious ‘worthy’ films that often scoop the prizes at these sorts of things.

I’ve yet to see a decent review of the film – sadly the cultural press here seem to do little more than praise a film without the critical eye we deserve. One newspaper article actually gave away the entire plot, which is the ultimate crime in film reviews.

I think there’s little doubt this is the best film to come out of Ivory Coast since Henri Duparc’s swan song, ‘Caramel’ (2004). The production is a considerable improvement on the improvised lines and poorly-recorded sound Ivorians are used to seeing in their tv series (which are not without their merit and are often very funny cf. Michel Gohou).

The plot is fairly predictable – girl seeks boy and has to decide between two suitors, one rich and the other poor. Though the humble launderette worker, Marcus, is the more appealing character, neither are perhaps particularly worthy of our heroine Estelle (played by Ema Lohoues), both stooping to lies and subterfuge to try and trick Estelle into choosing them.

By looking at the trailer, you’d have the impression the film is based around Estelle’s friends’ attempts to find the perfect man, but in fact this is only really a side story that actually adds very little to the film itself. It does make for funny interview scenes, although Sidiki Bakaba’s brief appearance as one of suitors was, I thought, embarrassingly poor and adds nothing to the talented artist’s rich career.

A friend of mine commented that the actors still give the impression that they know a film camera is watching them. I know what she means, though the acting isn’t bad, and the lead male, Mike Danon, helps bring out a lot of the humour of his role. I did think one of the key scenes when both suitors (who are actually close friends) turn up for the same date didn’t quite play true to life, with Estelle acting without apparent shock as the two suitors turn up at the same time. In fact, I felt the morale dilemma of Estelle encouraging two suitors at the same time was never quite explained and the lack of shame or surprise in this key scene was puzzling (see the trailer below and let me know what you think).

Overall I felt the film was a few scenes too long, but that’s not to take away from the fact that this is a very enjoyable film and audiences will no doubt be laughing along together. The film deserves a decent audience at the cinemas. Given the times, it will I think do people a lot of good to see a light-hearted romance that in the magic of cinema takes us out of our stressful lives for a couple of hours of entertainment. If it launches a new wave of Ivorian cinema, all the better.

You can watch the trailer for the film and a few extracts here.